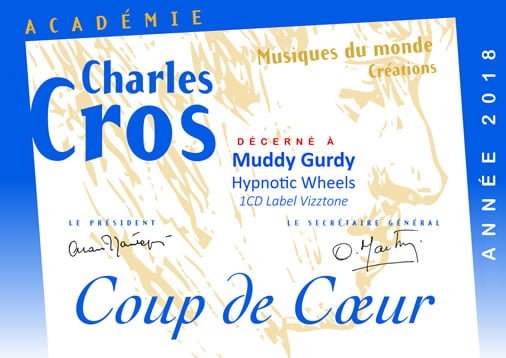 The specialists at the Academy listen, all year long, to the new releases as soon as they come out. Once a year, sometimes twice, they select discs which, according to themn “particularly deserve to be brought to the attention of the public.” With this precision: “Excellence of interpretation, innovative works, forgotten repertoires, new interpreting talents, audacity or editorial courage… are all taken into account” for the Coups de Coeur.  These Coups de Coeur are automatically entered in the preselection of the discs submitted to the yearly Grands Prix (Grand Prize) Charles Cros, which have been presented since 1948.

Detailed story and in fRoots compilation

In the “Gurdy Up!” story, published in the 418th issue of fRoots Magazine, Cara Gibney tells how “three French musicians headed to the Mississippi hill country to record the remarkable Muddy Gurdy project.” 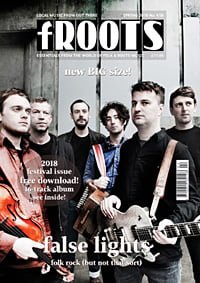 She interviewed Marc Glomeau, the percussionist who initiated the project, Tia Gouttebel who brought her guitar playing, her singing, and her knowledge of the blues world, Gilles Chabenat, the hurdy gurdy player, and Pierre Bianchi, the sound engineer who traveled with the trio to record the sessions. 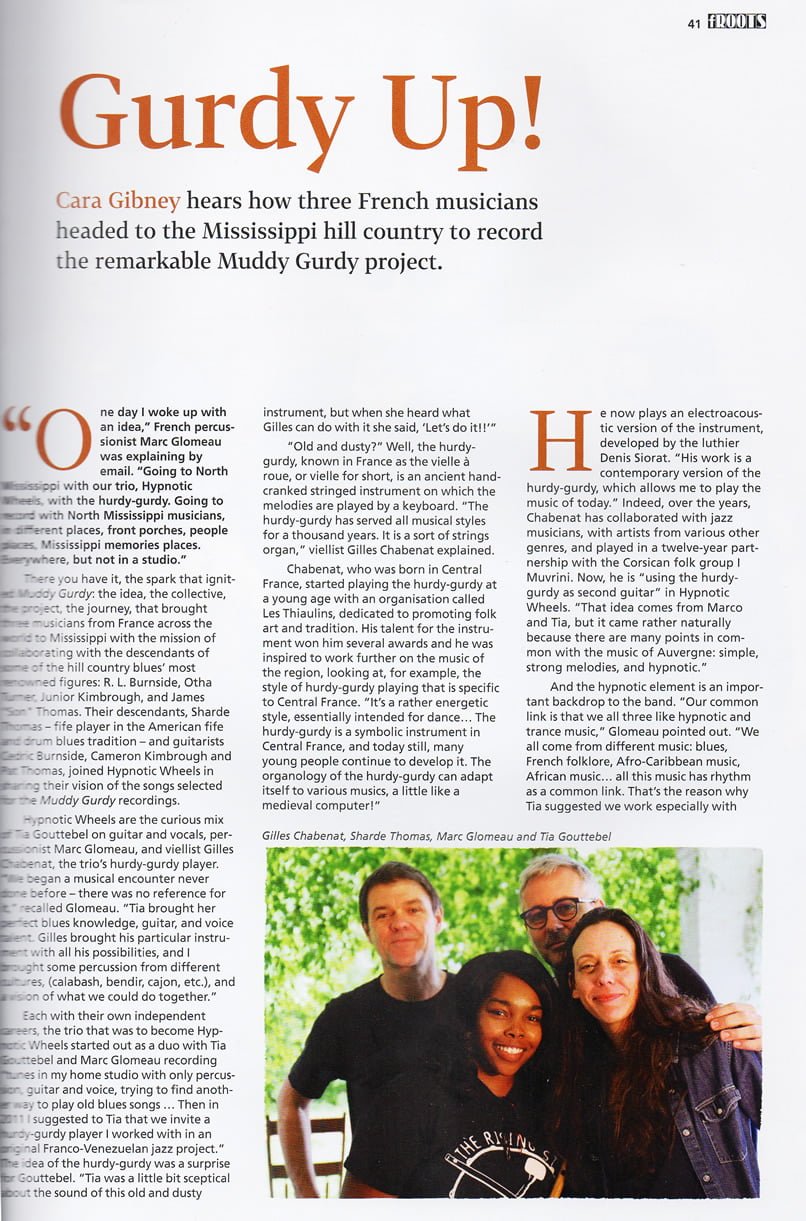 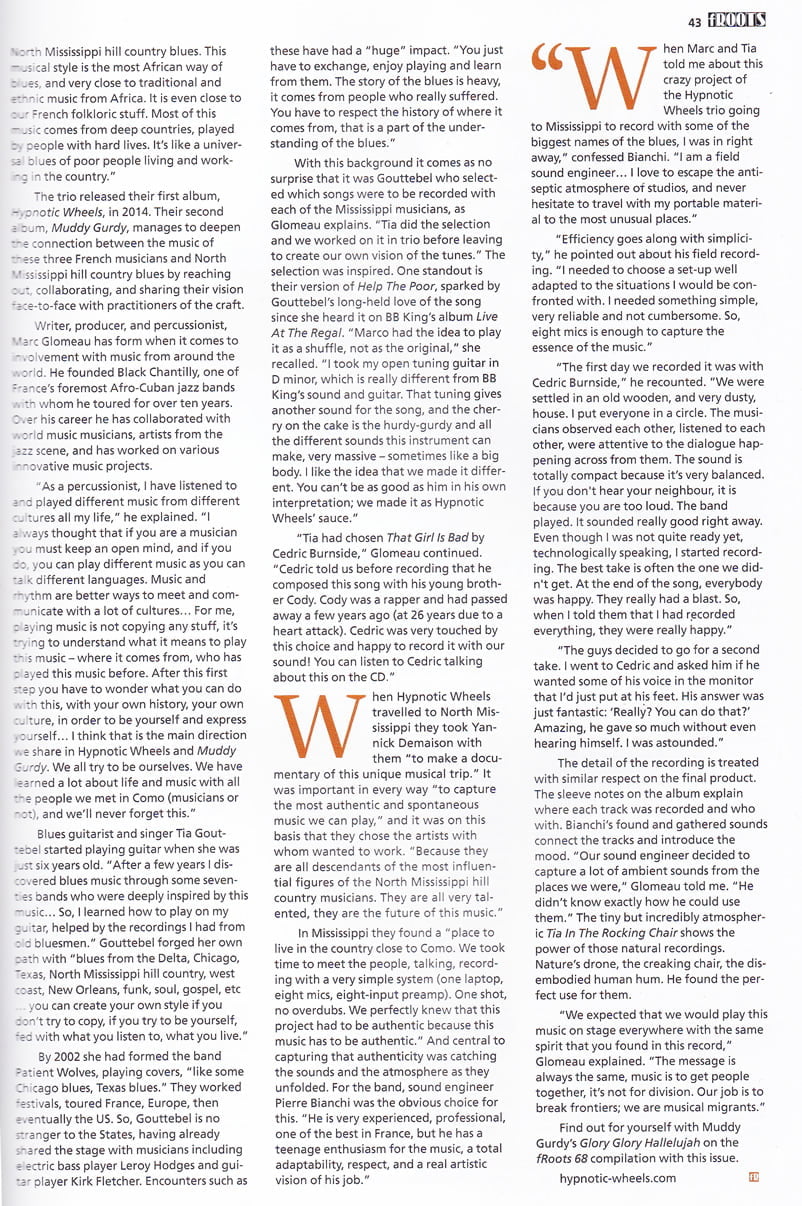 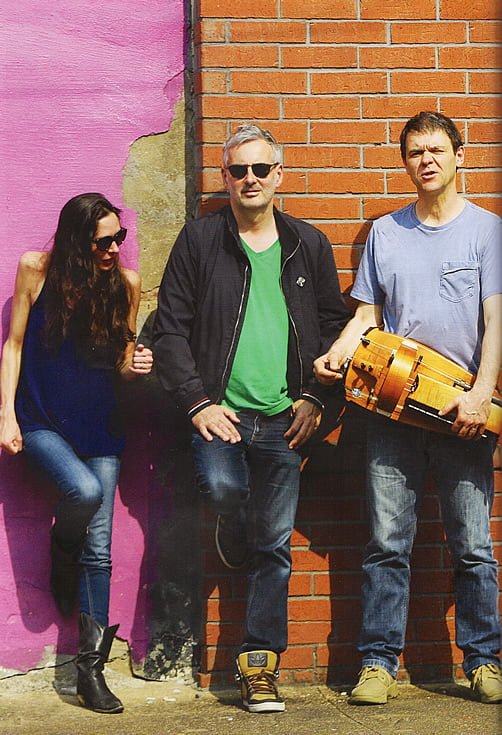 fRoots also picked one of Muddy Gurdy‘s songs to include in their free download compilation that goes with the Spring 2018 issue of the magazine. Glory Glory Hallelujah was recorded in the Spring of 2017 in Como, Mississippi, with special guest Shardé Thomas, granddaughter of Otha Turner, fife-and-drum-tradition extraordinaire. 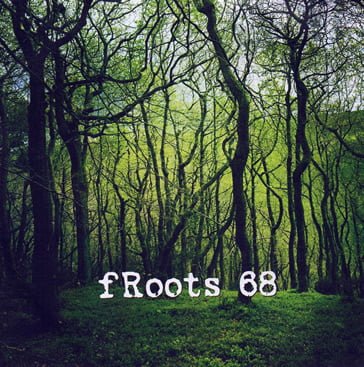 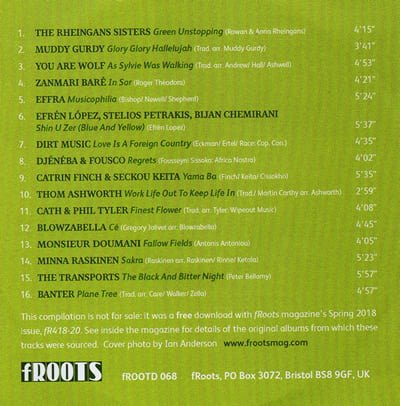 Read the full story written by Fernando Hernández (in Spanish) on Off the Hook.

Still growing in the charts

Look, look, look… There it is —again and again. Hypnotic Wheels’ Muddy Gurdy album stays in Roots Music Reports’ charts, up three places in the Blues album category, in the week of March 17.

The album rates 15, up one place, in the Contemporary Blues album category.

“Great album” for Breakfast with the Blues

“I have been playing it for a while… great album!!” comments Steve Spoulos who DJs Breakfast with the Blues every Sunday morning on KRVM, the Eugene, Oregon, public radio.

On March 4, he picked She Wolf, performed by the Hypnotic Wheels trio on the Dockery Farms grounds in Cleveland, Mississippi. A place where the blues was born, according to the Blues Trail Marker placed there.

In January, he had picked Rollin’ and Tumblin’.

“A fascinating, enjoyable and idiomatic recording”

This intriguing recording brings together a French trio (Hypnotic Wheels) with several of the most prominent living players of Mississippi North Hill Country Blues.  […]

After a brief instrumental, we hear four field recordings with Cedric Burnside (and one can hear dogs barking in the background) as they launch into a mesmerizing treatment of RL Burnside’s “Goin’ Down South,” with Cedric and Tia alternating vocals with some spellbinding single note guitar runs against a drone musical background. After the performance ends Cedric talks about times with his brother Cody who died at 29 before going into “The Girl is Bad,” with its somewhat jerky groove and slashing slide guitar. This is followed by a high stepping “See My Jumper Hanging On the Line,” with the French trio adding their congenial, if unusual sound to this spirited performance of another RL Burnside song. Cedric further shows how well he continues in the manner of his father on “Rollin’ and Tumblin’.”

Shardé Thomas adds vocals and fife to a vibrant rendition of “Station Blues” (a retitled “Sitting on Top of the World,” with Glomeau providing the fife and drum band groove with Tia and Gilles adding their buzzing backing). It is followed by a haunting “Shawty Blues,”and the spiritual “Glory, Glory Hallelujah.” Cameron Kimbrough then leads us on a lively rendition of “Leave Her Alone,” from his father Junior Kimbrough, set against the mesmerizing backing, while his own “Gonna Love You,” is a tough performance in a similar vein.

Pat Thomas’ “Dream” has a wistful quality while the hurdy gurdy of Chabenat provides a somber fiddle-like backing. It is followed by the trio’s own interpretations including a rendition of Jesse Mae Hemphill’s “She Wolf,” recorded at Dockery Farms, along renditions of Mississippi Fred McDowell’s “Shake ‘Em On Down,” and B.B. King’s recording, “Help The Poor.” One wonders Jesse Mae Hemphill might have thought of her music influencing this French singer and guitarist, who does a more than simply capable job in singing and performing these. Pat Thomas, sounding like his father, James ‘Son’ Thomas, closes this album at the Highway 61 Museum (with traffic in the background) with a simple, stark and moving “Standing at the Crossroads/Dust My Broom” mashup, titled here “Highway 61.”

While this won’t replace the classic recordings of Fred McDowell, RL Burnside, Jesse Mae Hemphill and Junior Kimbrough, the Hypnotic Wheels has produced a fascinating, enjoyable and idiomatic recording that pays homage to their musical influences. It presents the current practitioners of this tradition with emphatic backing that is so much more appropriate to the music than most efforts to modernize (or commercialize) this tradition. This is a recording that brings pleasure everytime I listen to it.

By Ron Weinstock, in one of his “semi-regular collection of observations, reviews and more about blues, jazz and other matters informed by the blues tradition.” Read the full review on In a Blue Mood.

“Leave Her Alone” makes it into the charts

Several songs of the Muddy Gurdy album have entered the charts in just a few weeks after its release by Vizztone, on February 2.

“Really a terrific release and one to catch!”

Otha Turner’s Station Blues really keeps in line with Turner’s roots with ancient slide sounds and snare drum accompaniment behind Tia’s vocals and Sharde’s fife. Very nice. With a more modern hip hop/jazz feel, Tia shows excellent vocal phrasing over a much more contemporary light sound. Cameron Kimbrough’s Gonna Love You has that classic North Mississippi sound with it’s loose guitar soloing and Hooker like vocals. Excellent! Mississippi Fred McDowell’s Shake ‘Em On Down has a great rudimentary feel with rhythm guitar drive and slide guitar flash. Very cool. Wrapping the release is Highway 61, played in the most raw form imaginable and with falsetto vocals over the sounds of cars and trucks on the road in backing.

This is really a terrific release and one to catch!

By BMan. Read the full review on BMan’s Blues Report.

Some more spins in the U.K.

Gary Grainger played Muddy Gurdy’s  See My Jumper Hanging On The Line during the 425th Blues Show, which broadcasts every Sunday evening from 6 to 9 PM on Bishop FM in the U.K.

Hypnotic Wheels recorded this song with Cedric Burnside  in the Como, Mississippi, countryside, for its Muddy Gurdy CD, in April, 2017.