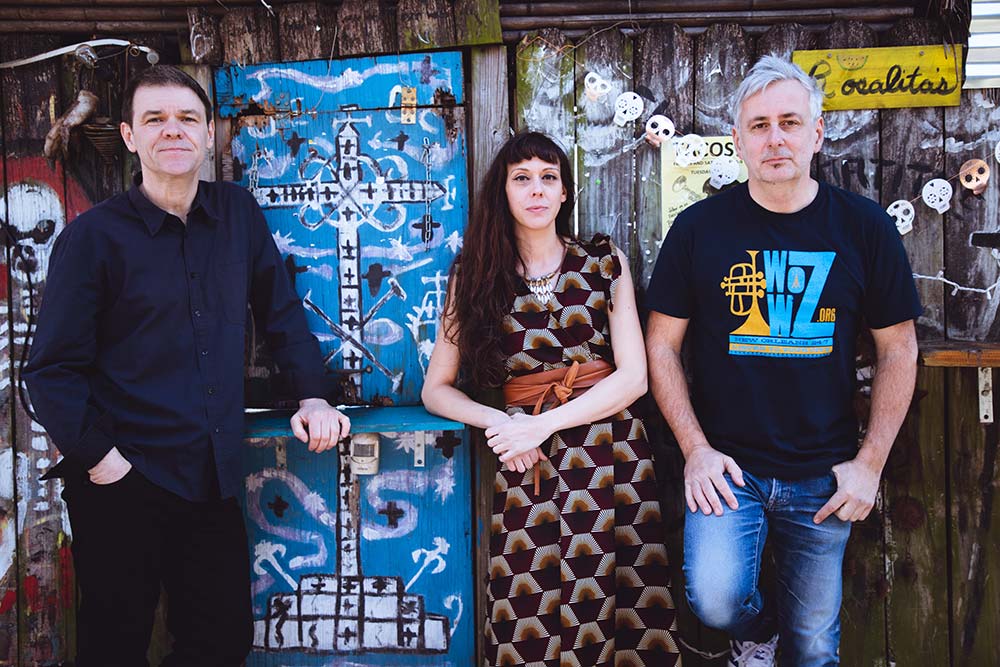 A blues singer-guitarist, a percussionist specializing in Latin rhythms, a hurdy-gurdy player expert in traditional music from central France. At first sight, these three should never have met. And they met, necessarily at the crossroads of different roads, and more precisely on the crossroad of the blues. In the spring of 2017, Tia Gouttebel (vocals and guitar), Marco Glomeau (percussion) and Gilles Chabenat (hurdy-gurdy) set off to record in northern Mississippi, known as « hill country », where kudzu and a form of hypnotic blues once sung by Fred McDowell, Jessie Mae Hemphill, Junior Kimbrough and RL Burnside proliferate. It is an initiatory journey as much as it is ethical.

Ethical, because they don’t go there for tourist clichés. Rather for an exchange of cultures, a real encounter, inviting locals to share their music, recording on the field with a mobile studio. The musicians from Mississippi had never seen or heard a hurdy-gurdy before. But among people of the earth, because the earth is round, we recognize each other, we understand each other.

Initiatory, because this trip signs Muddy Gurdy’s birth certificate. The album is imbued with the magic of the Mississippi. It is a favorite, a critical and commercial success, hailed and broadcast as far as the United States. With this album, Muddy Gurdy tours a lot and attracts a new audience (because they are funny and endearing on stage). In February 2020, just before the world stops spinning and the planes stop flying, they are selected at the Folk Allliance Festival in New Orleans, where they record a song for the archives of the prestigious Library of Congress.

For the rest, the challenge is great : how to do better or just as well, without doing the same thing again? How can we renew ourselves while remaining ourselves? The best blues is the one that is declined without repeating itself. And the one that doesn’t cut itself off from its roots, its history.
After having explored in situ the American sources of his music, Muddy Gurdy will find his own roots. Based a few kilometers from Clermont-Ferrand, the trio is planning its new recording in Auvergne, with emblematic local musicians. The recording is itinerant.

In a barn near the lake of Guéry, where the group has set up its bivouac. In a 12th century chapel lost at the bottom of a gorge near the Cézallier plateau. In another small chapel with the Sancy in the line of sight. In the former ballroom of a mountain bistro, where the owner sees more cows than customers. In the crater of a volcano in the middle of the night, under the light of torches. Pulling cables to places where there is no electricity, walking for a long time with the equipment on your back, making do with the wind blowing hard…

This recording made in August 2020 is still an adventure, and a story of encounters. The guests are the Champion brothers, two solid guys who dance the bourrée, organize balls and have created in the Combraille a center for learning traditional music and dance. The Champion brothers are part of those Auvergne people who have made the rural folk cultural heritage evolve and take it out of folklore. Just like Louis Jacques, who plays the electrified bagpipes in the electro-trad group Super Parquet. And then Guillaume Vardoz on the harmonica, a young musician who doesn’t play like in the blues, but in the Auvergne tradition, where this pocket accordion is the friend of the shepherds.

This kind of correspondence between two musics separated by thousands of kilometers is the nomadic soul of Muddy Gurdy. Gilles Chabenat’s hurdy-gurdy, as hypnotic as Junior Kimbrough’s guitar, is its essence. But there is another example on the album with the briolage practiced by Maxence Latrémolière, a young musician who also wrote a memoir on the subject. Briolage is a working song practiced by the ploughmen of Central France since the 18th century, and whose echo crosses that of the American holler. Like the Mississippi bluesmen on the previous album, all these musicians are rooted in a land, they are even the most beautiful fruits of it and have their reason for being on this new album.

We are not going to deflower the album here.

The best thing is to listen to it, to discover how the blues repertoire cherished by Tia Gouttebel (covers of Jessie Mae Hemphill, JB Lenoir, Fred McDowell) fits in with the Auvergne climate. How one can dance the bourrée and the boogie at the same time. How the compositions embrace the covers. How a moving Strange Fruit can grow in the crater of a volcano.

between 1999 and 2001. Tia began to develop her own style as a guitarist and vocalist. In 2002 she formed her own band, Tia & The Patient Wolves, and started performing in clubs in France and in Europe, as well as in the most prestigious festivals: Cognac Blues Passions, Cahors Blues Festival, and Salaise Blues Festival (France), Kwadendamme Festival (Holland), Blues in Bloom (Belgium), opening for international artists like Jimmy Johnson, Louisiana Red, John Mayall… Tia was awarded the Cognac Blues Passions Grand Prize in 2012 and opened for Charlie Musselwhite and Ben Harper in front of a crowd of over 6,000 the following year. She has traveled extensively in the United States several times (Memphis, Mississippi, New Orleans, Texas, Los Angeles, Florida). She has been invited on stage by the greatest musicians: bassist Leroy Hodges (Al Green), guitarists Kirk Fletcher and Johnny Moeller (The Fabulous Thunderbirds), drummer James Gadson (Bill Withers), harmonicist Lynwood Slim. All of them have been « amazed » by the talent and the authenticity of the French woman. More…

Gilles Chabenat was born in Central France. That is where he started playing the hurdy-gurdy at age 13 with Les Thiaulins, an organization devoted to promote folk arts and traditions. He won several awards and subsequently decided to work on his region’s rich traditional repertoire with already a desire to branch out into other musical styles. In the wake of Valentin Clastrier, he felt the need to reinvent the instrument and the playing techniques associated with it. Around that time and after several years of research, luthier Denis Siorat developed a contemporary-style electro-acoustic instrument which facilitated the integration of the hurdy-gurdy into the modern musical experience. In 1992, Gilles Chabenat began a 12-year partnership with famous Corsican band I Muvrini. He later met and worked with Sting, Véronique Sanson, Florent Pagny, Stephan Eicher, Jean-Jacques Goldman, and collaborated with jazz musicians Vincent Mascart, Jacques Mahieux, Alain Bruel, Alain Gibert, and Jean-Marc Padovani in a number of creative works, including a theatrical reading of Enzo Corman. His hurdy-gurdy can also be heard in a movie, Pierre Jolivet’s Le Frère du Guerrier. Gilles Chabenat’s approach shows the multiple aspects of an instrument which has been evolving for over 1,000 years. Just like he does today with Muddy Gurdy. More…

Percussionnist, writer, and producer Marc Glomeau founded Black Chantilly, which became one of the leading French Afro-Cuban jazz bands. He toured for over 10 years with the band. Marc Glomeau then worked with numerous artists from the jazz scene, as well as in French and American world music: Bruno Angelini, Thierry Peala, Rosy Bazile, Cheb Bilal, Arthur H. His meeting with drummer and writer Marlon Simon (nominated for a Grammy Award with his In Case You Missed It album) changed the course of his career. In 2008 the « Black Chantilly invites Marlon Simon » project wins the prestigious French American Jazz Exchange Prize, awarded by Culture France and the Chamber Music of America. The prize was followed by a tour on the East Coast in the U.S. Extremely creative, Marc Glomeau is at the origin of numerous original projects: Racines (a septet mixing Afro-Venezuelian cultures with those of Central France) along with Marlon Simon and Gilles Chabenat, Mère Grand & The Sound Avengers (a delirious pop concert revisiting TV-show songs with a 70s twist to them), Akrofo System (exploring links between jazz and African rhythms with pianist Philippe Monange). And, recently, Muddy Gurdy. More…