February 2, 2018. — Muddy Gurdy is the brainchild of a French trio named Hypnotic Wheels, based around the hurdy-gurdy (a classic hand-cranked, stringed instrument which is a kind of string section in a box), and deeply inspired by the blues of North Mississippi hill country. The adventurous trio traveled from France to Mississippi last year, and produced an amazing album of incredible new music – all field recordings, including collaborations with the descendants of Hill Country Blues royalty: Shardé Thomas, Cedric Burnside, Cameron Kimbrough, and Pat Thomas.

Used as a second guitar, the hurdy gurdy sounds like an African violin, with dense, rotating notes marrying this lascivious-aggressive North Mississippi blues… threatening, chaotic and sexy, this album is incredibly good, at the high level of the best heirs of the blues 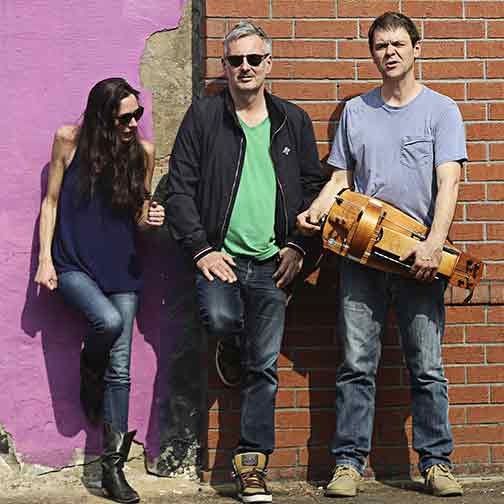 … the talent from both sides of the Atlantic is immense. This was not recorded in fancy studios in Memphis or Nashville but on back-porches, at people’s farms, and old clubs like the Ebony Club, places that retain the vibrations of the sounds made all those years ago. If you love Blues you will probably have trouble getting it out of your changer. This is a disc that you will play for friends and other music people who you wish to turn on to something new/old and exciting. 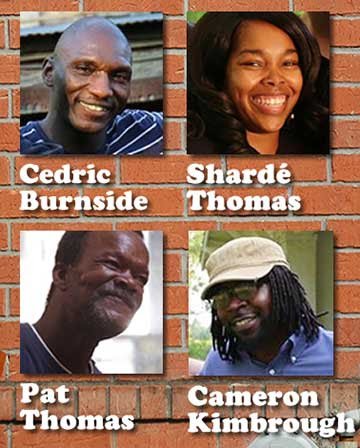 This is one of the most interesting collaborations of blues we have heard in some time. ..Without recording studios or top shelf technology, field engineer Pierre Bianchi captured these sessions with an 8 microphone preamp and a computer. The recordings took place on front porches, back porches, and historic landmarks in Mississippi. With no gimmicks the sound is not only authentic but especially engaging as you can hear train whistles and highway traffic on occasion

… Burnside, Shardé Thomas, Kimbrough, and Pat Thomas are all descendants of their prestigious elders (RL Burnside, Otha Turner, Junior Kimbrough, James Son Thomas). None of the four approach the project with a “take charge” mentality. Instead, they give humble, passionate performances, immersing themselves in the music. And, these musicians certainly passed on that North Mississippi Hill County feel to the trio. Listen to Cedric Burnside leading “See My Jumper Hanging on the Line” or Sharde Thomas leading “Glory” and then catch the trio doing Mississippi Fred’s “Shake ‘Em On Down.” No doubt, they got it.

The blues had yet another baby, and they called it Muddy Gurdy. Quite the beauty she is, too, crying her tunes straight from the hearts of people, and the souls of places. Though just marginally credited by name, Muddy Gurdy originated with the French trio, Hypnotic Wheels. Comprised of singer/guitarist Tia Gouttebel, percussionist Marc Glomeau, and Gilles Chabenat on the coil-on-strings hurdy-gurdy (thus, the band’s name), all three possess unbounded vision besides sheer talent.

… The hurdy-gurdy emits a tone right at home in these rural environs, akin to an off-kilter fiddle mimicking a scraped guitar one second, and perhaps an ancient organ wash the next.

… These punchy, wonderful recordings not only propagate the blues. They enrich its character, and most importantly, its significance.